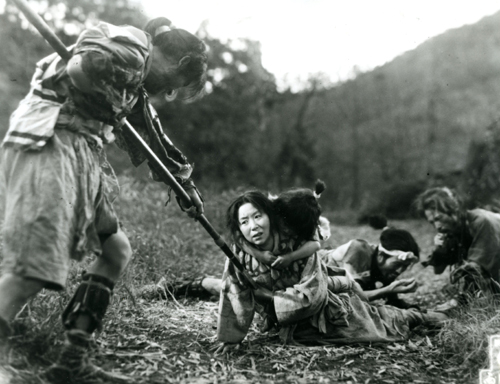 Director Kenji Mizoguchi’s final film is nothing less than a summation of his art. The Japanese National Diet’s debate over illegalizing prostitution is in the air, but it’s business as usual in Tokyo’s red-light district at the Dreamland salon (Hiroshi Miutani’s fantastic closed-world set). Street concerns five working girls living double-lives as daughters, mothers, wives, loan sharks and dreamers when they are not waylaying potential clients in a terrifying pull-and-tug clamor. Machiko Kyo is a standout as Hollywood-brainwashed “Mickey” in this unusual late-period contemporary drama. Shortly after it premiered, Mizoguchi was dead of leukemia at 58—and prostitution was outlawed in Japan.

In war-torn 16th-century Japan, two brothers, Genjuro and Tobei, prodded by their ambition, leave their wives and their village behind to pursue respective dreams of wealth and martial glory. Initial good fortune only increases their yen for adventure, and on their next venture out, they encounter a beguiling noblewoman, Lady Wakasa, who puts further temptations before them—though she may not be of this earth. Justly celebrated as containing some of director Kenji Mizoguchi’s most otherworldly and unforgettable imagery, Ugetsu is considered by many critics as one of the greatest of all films.