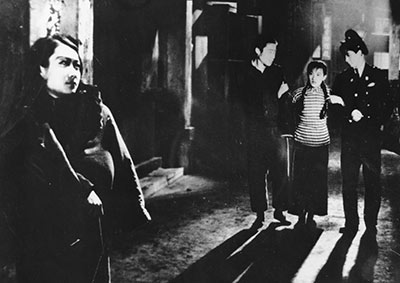 Loosely based on director Frank Borzage’s 1927 silent classic Seventh Heaven (though bearing the title of the film he made a year later) and a major hit upon its release in Shanghai, Street Angel is a curious mélange of leftist Chinese cinema motifs and Hollywood bravado, and plentiful other delightfully discordant elements. (The opening parade scene, featuring copious cross-cutting between bemused onlookers and the film’s playful main characters, could be mistaken for early Fellini.) Zhao Dan stars as a misfit street musician who sets out to rescue two hard-luck sisters—one already sold into prostitution, the other on the verge of the same and barely subsisting as a teahouse singer—from their dire straits. A scintillating mixture of melodrama, social realism, exuberant musical numbers and slapstick comedy, Street Angel is considered the definitive portrait of Shanghai street life in the 1930s, marvelously capturing the earthy energy and wild collective mood swings that preceded the incipient Japanese invasion.

A loose adaptation of Gaston Leroux’s “The Phantom of the Opera,” Song at Midnight is, “an oddball mixture of horror film, propaganda piece and musical; it rates historical importance as the first acknowledged Chinese horror film” (Donato Totaro). Soon after the fall of Imperial China, an opera troupe arrives at a theater overseen by a troll-like custodian and a catatonic woman named Li Xiaoxia, who is entranced by the haunting voice of a plaintive, unseen singer. The young leftist leader of the troupe delves into the mystery and discovers that the voice belongs to a mysterious man named Song Danping, once a famous opera singer who was tortured and hideously disfigured by an evil lord over his love for the woman who now thinks him dead. Beautifully rendered in gothic black-and-white, Song at Midnight is intriguing both for its political content—making the wronged hero Song Danping, “a fugitive revolutionary, using the theater as a sanctuary… with clear references to the chaotic political struggles of the 1920s” (David Robinson)— and its evocation of 1930s Hollywood horror films. Director Ma-Xu Weibang went on to be a force in postwar Hong Kong cinema, and may have helped institute its tradition of cleverly appropriating visual and narrative motifs from both Hollywood and other national cinemas.