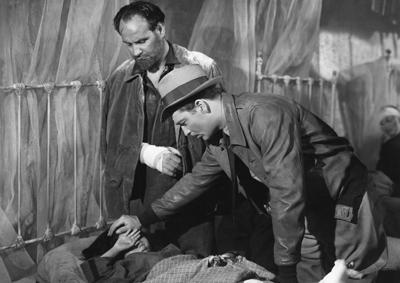 A group of prisoners on the lam from Devil’s Island—including Clark Gable, as a hardened thief, and a cabaret singer (Joan Crawford) escaping a different kind of prison—finds themselves joined on their harrowing journey to freedom by a mysterious and taciturn stranger (Ian Hunter). Beset by hardships, they are drawn to a stranger’s soothing spirit in director Frank Borzage’s most overt allegory of Christ.

Director Frank Borzage’s second adaptation of a LLoyd C. Douglas novel, after Green Light (1937), also concerned a young doctor’s spiritual redemption. The conflict in Dr. Beaven’s soul is externalized in the opposing arguments of cynical Dr. Forster (Akim Tamiroff), one of Beaven’s professors in medical school, and beautiful Audrey Hilton (Dorothy Lamour), the deeply religious young woman Beaven wants to marry. Forster succeeds in convincing Beaven (John Howard) to break off his and Audrey’s engagement, but Beaven then follows her to China, where he is gravely injured in an air raid. Forster arrives to perform the operation that will save Beaven’s life, but it is Audrey’s love that pulls him through. Borzage transcend’s Douglas’ stiff dualism with an ethereal visual style that never leaves his sympathies in doubt.