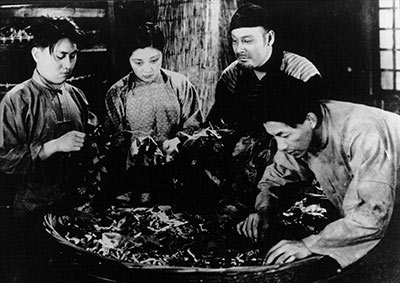 Hailed as one of the first successful attempts to weave progressive politics into Chinese popular cinema, Spring Silkworms is as notable for its exquisite attention to the details of rural life as it is for its revolutionary spirit. Scripted by the greatest screenwriters of the day, Cai Chusheng and Xia Yan, from the (decidedly un-militant) short story by May 4th writer Mao Dun, Spring Silkworms follows a humble silk-farming family struggling to be free of debt to exploitative middlemen (shades of Visconti’s classic La Terra Trema). While bristling with rage at the destructive macroeconomic forces brought on by late-stage colonialism, the film never sacrifices empathy to ideology; the Marxist message is further modulated by First Generation master Cheng Bugao’s lyrical depictions of local farming practices and the gorgeous Zhejiang countryside. Indeed, Cheng’s luminous landscape sequences (influenced by ancient scroll painting) attests to Spring Silkworms’ enormous continuing importance: regarding nature as virtually a character in itself, the film anticipates similar strategies in such later masterpieces as Fei Mu’s Spring in a Small Town and Chen Kaige’s Yellow Earth. “A milestone in the development of Chinese, and indeed world, cinema” (Paul Clark, “Chinese Cinema: Culture and Politics Since 1949).”

Followed by:
“The Big Road”
Directed by Sun Yu

A big-hearted classic of the 1930s progressive film movement, The Big Road (also known as The Highway) chronicles the efforts of six young, patriotic and unemployed city men building a highway to aid the anti-Japanese war effort. Among the many major achievements of Second Generation master Sun Yu, the film is also an early and mesmerizing experiment in sound design: as Paul Clark explains, “the silence of the film is broken by songs, particularly the road-making songs, which the workers sing together, and by a curious device, a series of percussion sounds, when one of the four men playfully taps the nose, chest and forehead of a gang comrade.” (This unabashed physical intimacy extends to a surprising nude bathing scene with the men, following some fairly raw talk from two women who are following the road crew’s progress.) Wearing its patriotism on its sleeve, The Big Road emphasizes the necessity of presenting a united front against the Japanese invaders; the only real villain is a Chinese collaborator who kidnaps two of the men to impede the highway’s progress. The film’s insistence on identifying class enemies reveals a darker side of this otherwise effusive and joyous work.