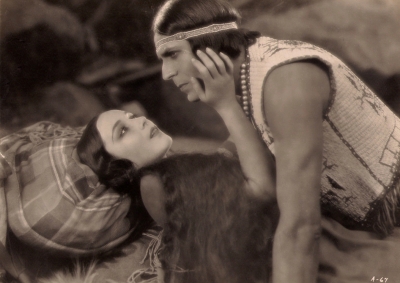 Edwin Carewe directed the 1928 version of what had by then proven a durable story, filmed twice previously (and at least once subsequently). Adapted from Helen Hunt Jackson’s hugely popular 1884 novel, and further disseminated in a wildly successful stage version presented at Hemet, California annually since 1923, the Ramona narrative tells of a mixed-race (Scots-Native American) woman, sympathetically detailing her persecution for reasons of race. Carewe, himself of Chickasaw descent (a very rare thing in Hollywood), represented a felicitous match for the material and a sensitive interpreter of the action. Also inspired was the choice of Dolores Del Rio as the star of the 1928 version, being herself a proud Mexican actress who famously declined to be identified as “Spanish” during her career. Wearing a theme of cultural diversity on its sleeve, the Ramona story has become a touchstone to generations of Californians, and an indispensable part of the state’s imaginative cultural heritage.

Ramona, the young, half-breed ward of oppressive California sheep rancher Señora Moreno, realizes that her indigenous blood will impede her life’s happiness, and sacrifices her love for her guardian’s son to save him from the taint of her sadness.  She endures much suffering before love and affirmation emerge as possibilities for her.