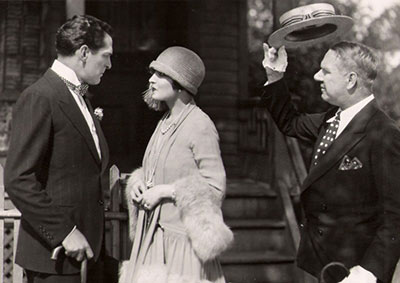 In one of W.C. Fields’ best silent outings, he plays Samuel Bisbee, a small town would-be inventor with delusions of grandeur. His daughter is in love with the son of one of the town’s better families, but the young man’s parents want no part of the dilapidated failure until an unlikely deus ex machina in the form of a European princess intervenes.

The henpecked husband was a comic archetype that W.C. Fields refined to wry perfection over the course his career. Here it exists in perhaps its most slapstick form on screen with Fields as Elmer Finch, a lowly clerk put upon by everyone until he’s accidentally hypnotized and turns the tables on his tormentors.

Preceded by:
“The Breath Of A Nation” (1919)
Directed by Gregory La Cava

A political cartoonist turned animator before directing feature films, director Gregory La Cava here lampoons Prohibition, with the help of fellow animator Grim Natwick (of “Betty Boop” fame). Based on a cartoon character created by Thomas A. Dorgan, Judge “Rummy” seeks fortification before appearing on stage as “the horrible example” at a temperance lecture, at the demand of his dominating wife. 35mm, b/w, silent, 6 min. Note: Live musical accompaniment provided by Cliff Retallick.