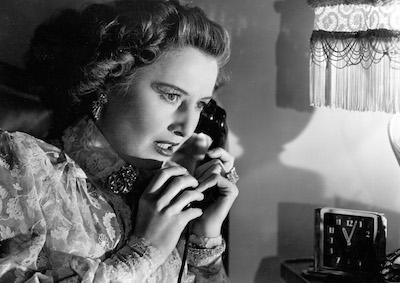 Barbara Stanwyck takes on Agnes Moorehead’s celebrated role as the frantic invalid of Suspense’s much-reprised radio play. Alone and bedridden, Leona Stevenson tries desperately to raise the alarm after overhearing a murder plot on the phone, only to realize that she is its intended victim. Claustrophobically structured in seemingly real time, director Anatole Litvak’s film speeds to its horrifying conclusion.

Followed by:
The Phantom of Crestwood (1932)
Directed by J. Walter Ruben

Listeners to RKO’s six-part serial The Phantom headed to theaters for this denouement to the tale of gold digger Jenny Wren and her untimely death after extorting former lovers for hush money. A sudden storm and an unexpected guest at a seaside estate set the stage for an atmospheric whodunit as the evening’s narrative unfolds through layered flashbacks and multiple perspectives.