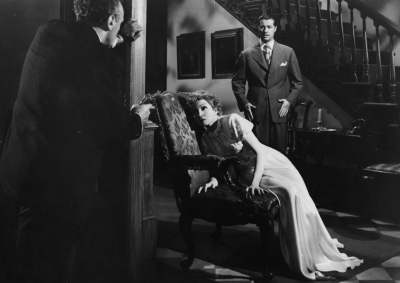 Alison Courtland (Claudette Colbert) is a wealthy New York heiress who wakes up on a train to Boston without a clue how she got there. In fact, her husband is working hard to drive her to suicide, so he can cash in on the inheritance. While Douglas Sirk was dismissive of this Gaslight story, his cluttered Victorian sets, high key noir lighting and Colbert’s stellar performance are marks of the director’s expert hand.

Dressmaker Lucille Lutien falls in love with painter and puppeteer Gaston Morell (John Carradine), who has a habit of strangling the women who model for his painting. As the police try to find the serial killer, sending Lucille’s sister undercover, Lucille remains in grave danger. Director Edgar G. Ulmer’s atmospheric recreation of 19th century Paris on no budget is enhanced by émigré cameraman Eugene Schüfftan’s extreme light and shadow.