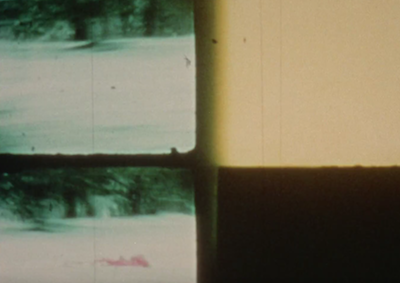 “The Songs…are inspired by the aesthetics of lyric poetry on the one hand, and the tactics of ‘home movies’ on the other….” — Stan Brakhage

In 1964, Stan Brakhage, turning away from the epic 16mm forms of Dog Star Man (1961-64), embraced the non-professional, home-movie regular 8mm format to create the Songs (1964-67), a series of 31 remarkable films. Unparalleled for their intimacy, poetic expression and depictions of daily life, these small-gauge gems are Brakhage’s most celebrated and influential works. Tonight’s program includes rarely screened 16mm versions of Songs 1-7 and the monumental anti-war lament, Song 23: 23rd Psalm Branch, considered by many to be one of Brakhage’s greatest films. Made in response to the Vietnam War, 23rd Psalm Branch reverberates with as much urgency today as when it was first shown more than a half century ago.

“Go, little naked and impudent songs”…into the auditoriums of the world and live…awhile longer.” — Ezra Pound, quoted by Brakhage

“A portrait of a beautiful woman.” — Stan Brakhage

“An envisionation of fire and a mind’s movement in remembering.” — Stan Brakhage

“This work…was in great danger (as all the Songs) of being lost forever due to deterioration of the original and all lab masters. Despite great expense, I’ve managed to enlarge the original (step-printed) into a 16mm master. I chose this film (above all other Songs) First, because the multiple splices & hand-painted sections of it endangered it most and because I fear the war-inclination of this society at this time once again.” — Stan Brakhage

“…an apocalypse of the imagination.” — P. Adams Sitney

“Brakhage combines his own images of Colorado, found footage of war, and some of his earliest hand painting on film to create a work that is rich with meaning and a key artistic milestone for him. Song 23 is an extended meditation on war in society, made in response to the war in Vietnam. It is a haunting work, still relevant in its theme and one of Brakhage’s masterworks.” — Chicago Filmmakers