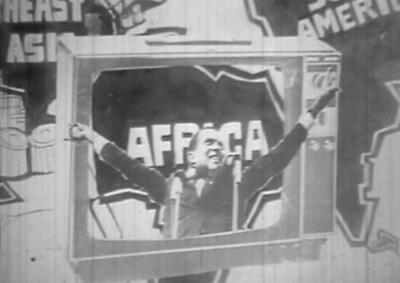 Documenting the 1971 Attica prison rebellion with footage of the calamity and subsequent interviews with guards and prisoners, this penetrating documentary also critiques the systemic subjugation of people of color in America, and gives voice to those at Attica who organized to secure their rights under abject conditions.

Howardena Pindell delivers a stark direct-camera monologue recounting incidents in which she was discriminated against for being an African American woman. A blonde white woman (Pindell in disguise) injects a cynical rebuttal, claiming Pindell is just being paranoid.

I Am Somebody (1970)
Directed by Madeline Anderson.

This inspiring documentary chronicles the struggles of underpaid female hospital workers in Charleston, South Carolina, in 1969, seeking to unionize as they heroically face down the National Guard and public opinion.

A Dream is What You Wake Up From (1978)
Directed by Larry Bullard, Carolyn Johnson.

An intimate portrait of members of three contemporary Black families, giving insight to the societal, economic, gendered and sometimes elusive forces that insidiously circumscribe and condition their everyday lives.