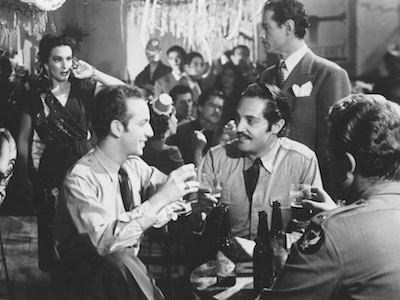 The películas de cabareteras (dance hall films) is a specifically Mexican film genre, involving working-class women forced to earn a living as prostitutes, and their relations to the men who abuse them. This was Fernández’s first entry in the genre that began with Santa (1932) and La mujer del puerto (1935), but it would not be his last. Mercedes works at a large dance hall, Salón México (made famous by Aaron Copland’s suite), where she wins a dance contest with her partner, Paco, who keeps the money. Desperate because she is secretly putting her kid sister through a private boarding school, she steals the money, leading to tragic results. The melodramatic plot had been around the block, but this is Mexican film noir, and style is everything. Figueroa’s haunting images and chiaroscuro lighting culminate in an homage to Fritz Lang’s Destiny (1921) with Mercedes’ stairway to heaven. As in all noirs, she cannot escape her fate.

One of Mexico’s most famous cabaret films, Víctimas del pecado begins in high gear and never relents: a young prostitute, Violeta, pulls a baby out of a garbage can, after a brutal pimp forces the mother (her colleague) to put it there. The rest of the film entails a monumental struggle between Violeta and the pimp, as Gabriel Figueroa’s camera stalks the underbelly of Mexico City, his images of black smoke from the railroad becoming the film’s central metaphor. Ninón Sevilla, whose wild and erotic Afro-Cuban cabaret number betrays a will to succeed, plays the role with almost religious intensity, rebelling against the machismo of the pimp with the feminine anger of a would-be mother. Rodolfo Acosta plays the pimp in outrageous pachuco suits, while Cuban superstar Rita Montaner, Mexican singer Pedro Vargas and Mambo King Pérez Prado provide the soundtrack to this grimmest of Mexican film noirs.