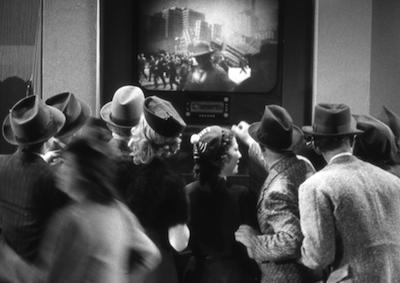 In S.O.S. Tidal Wave, television is as ubiquitous as the ever-gullible public, allowing a corrupt politicial machine to steal an election with a faked telecaset of a biblical flood inundating New York City.

Loosely based on the loathsome plastic surgery career of jazz age “King of Quacks” Henry Shireson, False Faces is a delirious film à clef, among the best of Warner Bros.’ pre-Code muckraking programmers.

In his trademark Lower East Side sprechgesang, Jimmy Durante gives his all for President Franklin D. Roosevelt and the National Recovery Administration. The Schnozzola belts out an original number he wrote for the occasion: “If the old name of Roosevelt makes your old heart throb / Then take this message, straight from the President / And give a man a job!” Look for solo stooge Moe Howard as the Exterminator.