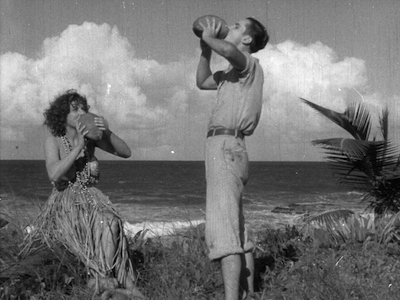 Restored by The Packard Humanities Institute

The first Puerto Rican sound feature ever made, this film was considered lost for over 80 years, before a print was located in the PHI/Krypton Collection at UCLA. The story concerns a young man who discovers a pre-modern tribe on an island and a fortune in pearls, subsequently falling in love with a beautiful native woman, while his upper-class sweetheart waits in the city. Many famous Puerto Ricans worked on the film, including screenwriter Luis Palés Matos, a national poet and one of the founders of Afro-Antillano poetry, and composer Rafael Muñoz, the Island’s most famous big band leader. Puerto Rican film pioneer and Hollywood veteran Juan E. Viguié produced the film with a $10,000 loan, after seeing Santa (1932) in a San Juan cinema. Like She-Devil Island (1936), the film presents a parable of colonialist exploitation of third world peoples, ironically wrapped in an exotic adventure narrative.