Roman Holiday and Three Coins in a Fountain 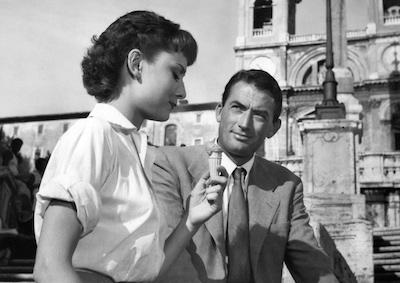 “Hollywood on the Tiber” reached a high point in this story about a European princess (Audrey Hepburn in a star-making performance) who escapes her oppressive royal life during a visit to Rome, where she’s taken on a city tour by an undercover American reporter (Gregory Peck). The authenticity of Rome was important to Paramount and director William Wyler, but so were financial incentives. The studio invested its frozen lire earnings in the production while the director took advantage of a tax loophole by working abroad. The result brought a realist touch to the romantic comedy and multiple Academy Awards.

Three Coins in a Fountain (1954)
Directed by Jean Negulesco

The postwar film cycle of Americans abroad was in full swing when Fox released this tale of three single American secretaries navigating work and love in Rome. New to this cycle was the use of widescreen, which heightened the spectacle of the Italian locales. Director Jean Negulesco, who had first tried out CinemaScope on How to Marry a Millionaire with mixed results, skillfully used the format to capture Italy’s architecture in dazzling panoramas. The film won Oscars for Best Cinematography and Frank Sinatra’s titular hit song.