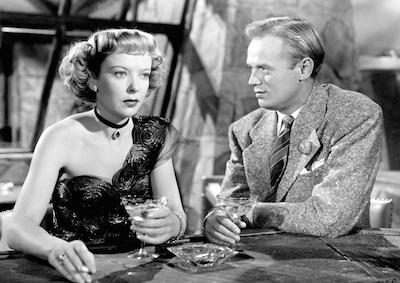 Ex-war buddies Richard Widmark and Cornel Wilde run a lakeside nightclub in this flavorful film noir with a North Woods setting. Everything is fine until blues singer Ida Lupino’s preference for Wilde sets Widmark off on a jealous rage. Widmark is effective in a role that recalls his breakthrough performance as a psychotic killer in Henry Hathaway’s Kiss of Death the year before, but it is Lupino who takes over the picture. Her Lily Stevens emerges as the quintessential noir heroine — tough, strong-willed, able to take care of herself, yet passionate and fiercely loyal. Along the way, she offers memorable interpretations of three classic blues songs: “One for My Baby,” “The Right Time” and “Again” (written for this film by Lionel Newman and Dorcas Cochran). Lupino’s singing is hardly melodious, but you may agree with another character’s comment that Lily “does more without a voice than most singers do with one.”

A parade of waterlogged puns brought to Technicolor life precedes a vision of undersea nightlife at The Fish Bowl, where you’re invited to follow the bouncing ball and sing along to “Three Little Fishes.”

“Before a tense joint session of Congress, President Truman demands legislation to halt the advance of Red tyranny through Europe.” — Hearst synopsis sheet