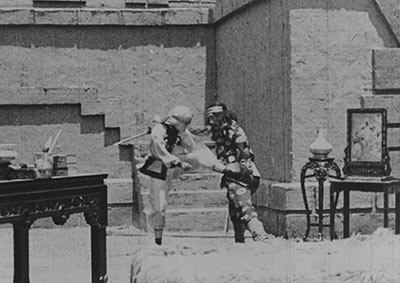 The only surviving section of the 13-part serial Red Knight Errant, this barn-burner of an action epic is a prime specimen of the martial arts/fantasy film explosion of late-twenties and early-thirties Shanghai–but one with a significant twist. In place of the typical manly hero, Red Heroine presents a swashbuckling woman clad in exotic costume soaring through the air, disappearing in clouds of smoke and laying waste to armies of baddies with a sweep of her sword. Opening with Red Heroine’s abduction by a tyrannical warlord, the film follows her rescue by a hermit monk, her training to become an unstoppable killing machine, and her efforts to stop the warlord ravaging the countryside and enslaving numerous (very) scantily-clad young women. (Chiang Kai-shek, the Nationalist strongman then ruling China, had threatened to ban all martial arts cinema for its immorality, but one wonders if the films’ politics cut a bit too close to the bone as well!) Reportedly a smash hit on its release, Red Heroine helped set the template for later revivals of the martial arts genre in Hong Kong and elsewhere.

Although virtually all of early Chinese cinema has been destroyed, what remains offers a fascinating glimpse into the creative crucible of 1920s Shanghai. Laborer’s Love, written by Zheng Zhengqiu and directed Zhang Shichuan—both of them regarded as founding fathers of the First Generation of Chinese cinema—is a synthesis of Harold Lloyd-like silent comedy and the May 4th literature then in fashion. While the film’s charming story of a soft-hearted carpenter turned fruit peddler trying to impress his future father-in-law does not much seem like a call to class warfare, the pointed references to urban corruption and the character of a happily liberated young woman anticipate the progressive impulse in much Chinese cinema to come.

“Romance of the Western Chamber”
Directed by Li Minwei

Less than an hour remains of this sumptuous costume epic, at the time one of the most lavish Chinese productions ever made. Based on a scandalous Yuan Dynasty play, the film chronicles the blossoming affair between a young scholar and a courtier’s daughter, set against the backdrop of a bandit siege. Featuring a few breathtaking hand-tinted sequences and replete with breakneck action, intrigue and old-fashioned romance, Romance of the Western Chamber anticipates the later “anything goes” spirit of Hong Kong New Wave director Tsui Hark.