‘Prizzi’s Honor’ and ‘The Dead’ 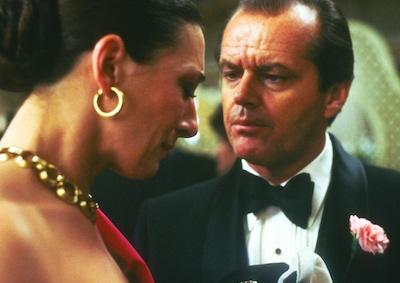 Huston’s bravura dark comedy Prizzi’s Honor is a late-career masterpiece, one of three, including Under the Volcano and The Dead, but what separates it from the others is the stylish energy that prompted Pauline Kael to suggest the film felt as if “a fresh new talent had burst on the scene.” Jack Nicholson plays Charley, a loyal hitman for the Prizzi crime family, who unwittingly falls for another professional killer (Kathleen Turner). A comically fraught complication on its own, it’s an affair of the heart keenly exploited by the black sheep of the Prizzi clan, Maerose (Anjelica Huston), to work her way back into the family’s good graces — and its circle of power. Their second serious work together for father and daughter (the first being A Walk With Love and Death), Prizzi’s Honor earned Anjelica an Oscar for Best Supporting Actress.

Even while confined to a wheelchair and breathing from an oxygen tank, an 80-year-old Huston still perhaps couldn’t have predicted the irony in the title of his final contribution to his filmic canon. Released posthumously to widespread critical acclaim, this adaptation of James Joyce’s short story was Huston’s 41st work, a beautiful collaboration with daughter Anjelica as star and son Tony as screenwriter. Shot on location as a love letter to Ireland, where Huston also held citizenship, this intimate, deeply personal film poignantly and nakedly confronts “that awful bare fact of being alive — and then, not” (The Guardian).