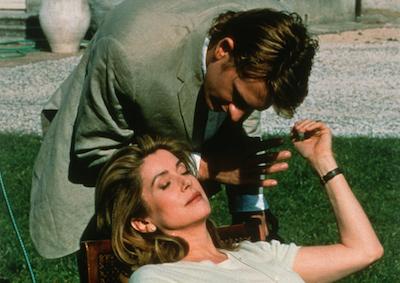 “This film by Leos Carax (Lovers on the Bridge, Holy Motors) is 20 years old but has rarely been seen in the U.S. With a score by singer-songwriter Scott Walker that’s alternately lush and jagged, and bathed in numinous shadows by cinematographer Eric Gautier, Pola X was said to be loosely based on Pierre: Or, the Ambiguities, Herman Melville’s gothic, psychosexual ‘spirit autobiography.’ Indeed, its allure is occult.

“It involves romantic maybe-siblings played by Guillaume Depardieu and Yekaterina Golubeva, the boy’s mom (Catherine Deneuve), graphic sex, fast bikes, darkness and death (Sonic Youth shows up, too). Carax was reaching the tail-end of his enfant-terriblehood (he was 38) and the film feels like his cinematic scream into the abyss of the oncoming millennium. He was right to scream: Both his gorgeous young leads are dead (Depardieu at 27 in 2008, Golubeva at 44 in 2011). Then there’s the ghostly, pseudonymous Carax himself who’s as likely to be sipping tea near the Pont Neuf in Paris as sitting in the dark of this theatre, behind you.” — Sandi Tan

“If you were a teenager in 1986, you might have been drawn in by the strange aura of newcomer Keanu Reeves. If you were older, maybe it was the hand wringing over screenwriter Neal Jimenez’s depiction of casual teenage anomie: a girl is murdered by her boyfriend, his friends get drawn in; there’s guns, drugs and sleeping-bag sex. It felt fresh in that familiar, depressing, suburban way, you know?

“Shot by Frederick Elmes (who also shot lue Velvet at around the same time), River’s Edge is notably darker in tone than Stand By Me, the other kids-find-a-dead-kid’s-body movie from 1986. There are career-high performances by Ione Skye, Crispin Glover, Dennis Hopper and creepy little Joshua Miller (now a screenwriter). Tujunga and Sunland stood in for gloomy NorCal. The director is Tim Hunter, who went on to make golden-age television shows like Breaking Bad and Mad Men. The film won the Spirit Award for Best Picture and showed the way forward for American indies; alas, few could follow.” — Sandi Tan