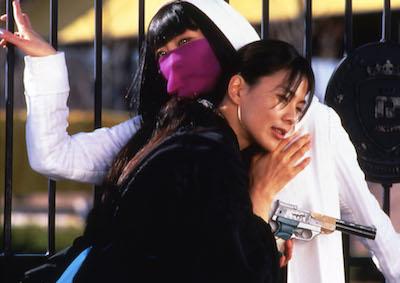 When Satoru Ogura suggested director Seijun Suzuki make a sequel to his most notorious film, Branded to Kill (1967), the result was this eye-popping action extravaganza, which is less a sequel than a compact retrospective of Suzuki’s style and themes, updated with CGI effects and infused with the metaphysical concerns of the Taisho Trilogy. Makiko Esumi plays Stray Cat, the number three killer in her assassins’ guild. She battles her way to the top against characters such as Painless Surgeon, a cowboy who can feel no pain, and the mysterious number one killer “Hundred Eyes.” Along the way, Stray Cat detours into the land of the dead, where her victims lurk, and into the “Atrocity Exhibition,” where she battles foes amid grotesque paintings from throughout art history. Pistol Opera (2001) proves that, even in his 70s, Suzuki’s creativity was still firing on all cylinders.

A Tale of Sorrow and Sadness (Hishu Monogatari) (Japan, 1977)
Directed by Seijun Suzuki

Nearly a decade after being fired by Nikkatsu Studios, Suzuki returned to the director’s chair with this titillating tale of a model who is groomed to become a professional golfer as a publicity stunt. When she turns out to be good at the sport, her success leads a deranged fan to hatch a blackmail scheme. “Riddled with the director’s wildly non-conformist use of non-contiguous edits, unhinged shot composition, and violent splashes of colour, crazed and chaotic and for too long buried in the sand bunkers of obscurity, this long-overlooked work simply cries out for revival.” —Jasper Sharp, Midnight Eye.

In-Person: Tom Vick, curator of film, Freer and Sackler Galleries, author of Time and Place are Nonsense: The Films of Seijun Suzuki.