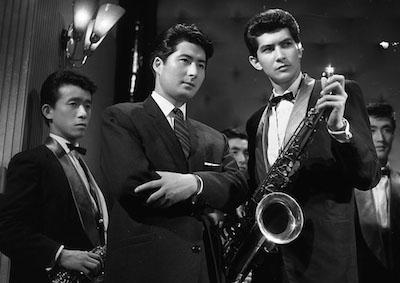 In this stylish film noir, a trombonist goes on an all-night bender after his wife disappears during their honeymoon. When he returns home to find her corpse in their apartment, he sets off on a frantic quest to find her killer by piecing together a night he can’t remember. Director Seijun Suzuki used this classic noir material to play with genre tropes and make expressive use of darkness and light.

When their train is trapped by a landslide, passengers—including a murderer escorted by police officers—pile into a bus to proceed through the rugged countryside. Meanwhile, two bank robbers are loose in the vicinity. As the travellers’ journey continues, the danger mounts and tempers begin to fray. Bizarre camera movements and compositions provide a glimpse of the experimentation that took over in director Seijun Suzuki’s later films, but Eight Hours of Fear (1957) stands on its own as a gripping, eccentric adventure yarn.

In-Person:Tom Vick, curator of film, Freer and Sackler Galleries, author of Time and Place are Nonsense: The Films of Seijun Suzuki.