Outrage and The Bigamist 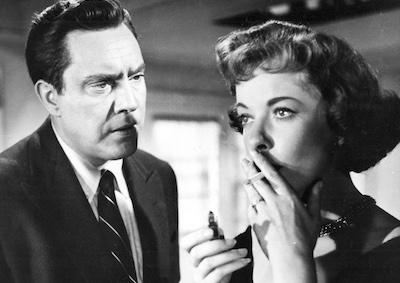 After staying late one night alone at work, Ann Walton (Mala Powers) is followed and sexually assaulted by a leering coffee cart employee. Opting to empathize with the character’s trauma, isolation and residual fear instead of focusing on the “whodunit” angle, director Ida Lupino follows Ann as she flees from her family and fiancé as she grasps for anything that might aide in her healing. Lupino’s intense story of victimhood and the fallout triggered by a traumatic event never finds its characters uttering the word “rape,” instead opting for censor-friendly euphemisms such as “criminal attack” and “assault.” Recently remembered and heralded by Richard Brody in The New Yorker as “prescient” and “a special artistic achievement,” Outrage asserts itself in the moody visual language of noir, lodging us firmly inside Ann’s brainspace with its ominous sonic punctuations.

The first Hollywood sound feature wherein its female star directed herself, The Bigamist also marks another in Ida Lupino’s string of filmmaking efforts to squarely confront pressing, taboo social topics. This dramatic, haunting noir uniquely centers on fragile family man and traveling salesman Harry (Edmond O’Brien) torn between his matrimonial devotions to two women: the business-minded but barren San Francisco-based Eve (Joan Fontaine) and his independent, grounded (and fertile) Angelino, Phyllis (Lupino). Caught in his lies by an adoption agent, Harry’s tangled romantic yarn is spun in a series flashbacks. RKO was originally attached, but producers Collier Young and Lupino instead opted to self-distribute when they recognized the measly profits that were barely returning to their pockets.

Restored by UCLA Film & Television, with funding provided by The Film Foundation and the Hollywood Foreign Press Association.