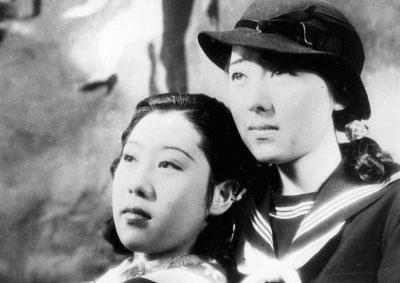 “In this film the mature Mizoguchi style emerges for the first time,” wrote film scholar Joan Mellen. Ayako is barely making ends meet by working as a switchboard operator to support her family, so she becomes her boss’s mistress, and hardens herself into the role of a moga (“modern woman”). Kenji Mizoguchi said that Osaka Elegy was the film with which he found his true direction, and it is evidently among his most personal—Ayako’s feckless father is rumored to be based on the director’s own. Capped by a devastating final shot, it is also a trenchant social criticism, and after 1940 was banned by the military government.

Followed by:
Sisters of Gion (Gion no Shimai) (Japan, 1936)
Directed by Kenji Mizoguchi.

Along with Osaka Elegy (released the same year), this devastating portrait of courtesans scraping by in Kyoto’s “pleasure district” marked a turning point in Kenji Mizoguchi’s career. Its story of two geisha sisters—one deferential and loyal, the other defiant and mercenary—lays forth one of the earliest and most forceful expressions of the director’s central thematic concern: the subjugation of women in a callously patriarchal society.