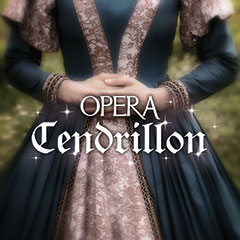 Based on the version of Cinderella by Charles Perrault
Music by Jules Massenet, Libretto by Henri Cain
Conducted by Christopher Ocasek; Stage Direction by Peter Kazaras
Choreography by Kevin Williamson

This witty production is a new take on the Cinderella fable, complete with a wicked stepmother, a lost slipper and a clock about to strike midnight. Featuring graduate and undergraduate designers from the Department of Theater and undergraduate actors from the School of Music. Presented in collaboration with Opera UCLA, UCLA Philharmonia and the UCLA Herb Alpert School of Music. Performed in French with English supertitles.