Nude on the Moon and Smut Without Smut: Bizarro Horror Nite 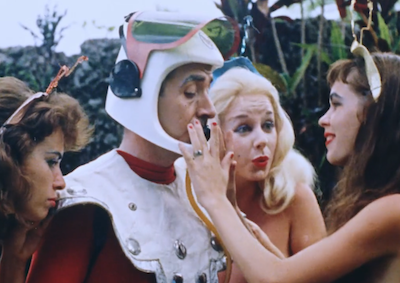 Nude on the Moon (1961)
Directed by Doris Wishman

This second feature from reigning exploitation auteurist Doris Wishman (1912-2002), according to fellow schlock-maker Frank Henenlotter, “represents everything that’s perfect about American pop culture. Stupid to the point of breathtaking, Nude on the Moon is also one of the most enjoyable examples the long-extinct nudie-cutie,” a tamer sexploitation sub-genre that grew out of the popular American nudist colonies of the 1950s. With the moon played by Southern Florida’s weirdo tourist attraction Coral Castle, the end result of Wishman’s vision produces, (Henenlotter again), “less a movie than a catalog of pure kitsch delirium.” Nude on the Moon will be followed by a conversation with Something Weird Video vixen Lisa Petrucci, who will share the legacy of one of the longest-running facilitators of exploitation rarities on home video formats! New digital preservation. Los Angeles premiere

Beneath the dumpsters of 1970s America, a netherworld of “adults only” horror movies lurked in the gutter. But what if these movies were less about the smut—and more about the horror? Smut Without Smut: Bizarro Horror Nite is hardcore horror movies with the hardcore removed. In other words, the parameters of reality will never be the same again. WATCH! Argento-esque gore killings in skid row apartments! SEE! Bigfoot in his most “natural” habitat! OBSERVE! Credits like “Art Direction by DeSade!” Dreamy, hilarious and filled with plastic vampire fangs, Smut Without Smut: Bizarro Horror Nite is the most unforgettable party you’ll attend this year. That said, we cannot be held responsible for any lasting trauma. — Joseph A. Ziemba

An original co-presentation by AGFA and Vinegar Syndrome