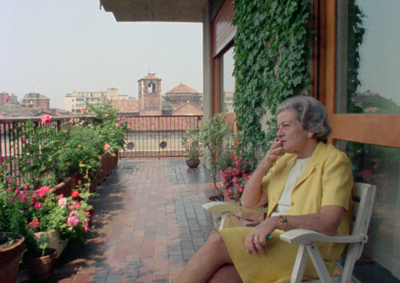 “Long live dynamite!” Straub-Huillet attempt to unmoor their audience by denying them the soothing reassurances of conventional storytelling, spatial continuity or psychological explanation as they hopscotch across the chronologies of Heinrich Böll’s novel, moving freely between the Kaiser autocracy of the 1910s and the Adenauer economic miracle of the 1950s. In doing so, they chart the origins and legacy of Nazism, and the moral demands of obedience and sacrifice within the German bourgeois family.

Franco Fortini, a Communist critic and writer of the Italian New Left, reads excerpts of his book The Dogs of Sinai, which condemns capitalism and the state of Israel in the aftermath of the Six Day War in 1967, while also reflecting on his own Jewish heritage. Cinematographer Renato Berta’s panoptic camera surveys the Italian landscape where partisans resisted German soldiers. Fortini/Cani is an elegiac and damning meditation on abuses of power and historical amnesia.

Relishing his political and sexual prospects in postwar Germany, a former Nazi colonel muses on the stupidity of the bourgeoisie, who can be easily duped in the voting booth and in the bedroom. Straub-Huillet’s first released film is a powerful, almost surreal distillation of Heinrich Böll’s story, skewering the German soul though gallows humor, an interior monologue of calculation and cynicism, and a montage of jingoistic newspaper headlines. Straub would observe that the film is “built on the equation M [military] = M3 [murder].”