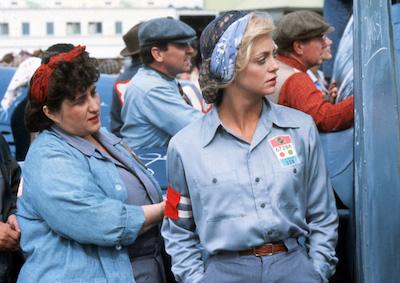 Based on real-life factory employee and eventual labor organizer Crystal Lee Sutton, this galvanizing story of North Carolina textile worker Norma Rae Webster and her mobilization to unionize her cotton mill bestowed Best Actress accolades upon Sally Field for her committed, inspired performance. The character of Norma Rae is a tour de force of chutzpah and bravery as she makes demands on her bosses and their lackadaisical, if not downright dangerous, labor practices, all under the encouragement and guidance of labor organizer Reuben Warshowsky (Ron Leibman). With photorealist cinematography and an overwhelming message of empowerment, Norma Rae upholds inspiration and validation for any woman who has put their body in harm’s way for a worthy cause.

When Kay Walsh (Goldie Hawn) waves goodbye as her husband Jack (Ed Harris) is called to the Navy to serve his country, this housewife finds wartime employment at a California-based aircraft manufacturer. A romance between the efficient yet soft-hearted Kay and co-worker Lucky (Kurt Russell) ensues while Jack is overseas in this throwback that considers the first influx of women in the American workforce. Filmmaker Jonathan Demme’s grandmother worked the swing shift during WWII, which naturally drew him to the story of this Rosie-the-Riveter-esque figure. At the insistence of stars Hawn and Russell, Demme’s final product is more romantic and comedic than originally intended, producing an Altman-esque, delightfully specific period piece.