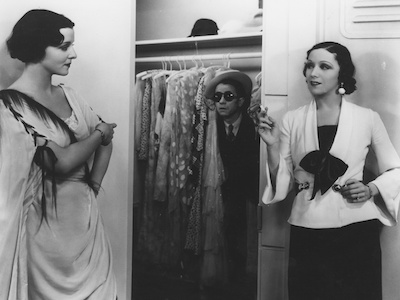 Following her first wedding anniversary and fed up with the jealousy of her husband Raúl (Raúl Roulien), Rosa (Rosita Moreno) takes a “marital vacation” and sets sail on an ocean liner. Unbeknownst to her, Raul gets on board disguised as a barber to spy on her every move. This dynamically paced romantic comedy — peppered with songs and dance — is one of four Fox film productions that paired the sophisticated and refined Moreno — an accomplished dancer — with the charming Roulien, the smooth chanteur. The film offers a glimpse of character actors Romualdo Tirado (Tom) and Jose Peña “Pepet” (Steward), staples of 1920s and ’30s Los Angeles’ Spanish-language theater and vaudeville.

After winning a trip to Hollywood, office typist Lolita Álvarez (Cristina Téllez) travels to the city of dreams on a steamship in the company of her aunt Gertrudis (Pilar Arcos). During the trip, she meets and falls for childish bank employee (Rafael Alcayde), whom she mistakes for a prince, just as she impersonates a well-travelled socialite. The film features a flamenco-inspired tap dancing scene performed by dancer Edith Davis. Before becoming a prolific filmmaker in the Mexican film industry, Jaime Salvador (of Barcelona, Spain) began his career with the direction of Castillos en el aire, an independent film production financed by his then brother-in-law, Eduardo Albacini Gastine (a.k.a. Le Baron), a Syrian-Venezuelan orchestra leader, who became the toast of the town with Latin music performances at his Trocadero Café. The film marks the debut of Alcayde and Téllez, who appear with Spanish opera singers Andrés de Segurola and Emilia Leovalli, and Los Angeles stage comedian José Peña “Pepet” (El Ferrol).