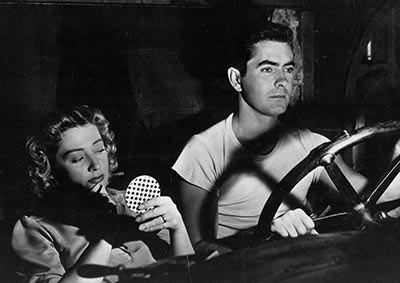 Bored with playing sympathetic heroes, Tyrone Power persuaded Twentieth Century-Fox to cast him as a calculating heel in a noir-ish film version of William Lindsay Gresham’s 1946 novel. Ambitious carnival roustabout Stan Carlisle takes over a sideshow mind-reading act and transforms it into a slick nightclub turn. Determined to milk the “spook racket” for all it’s worth, Stan next joins forces with a corrupt psychiatrist who supplies him with confidential information about her wealthy patients that Stan uses to convince them of his psychic ability. Power skillfully conveys Stan’s cynicism and nervy charm, along with his oddly touching naiveté: he cannot help believing in tarot cards, and has a superstitious fear of divine retribution. Nightmare Alley stands out among 1940s films for its darkly humorous slant on phony religionists and their gullible followers.
–Charles Hopkins

Stories include: precision measuring devices, a “scientific” barbershop in Westwood, and a testing station for high-intensity landing lights and other fog-fighting aids at the Arcata Airport. 35mm, color, 10 min.

“News of the Day, Vol. 19, No. 207: “The Forgotten Islands” (Sept. 25, 1947)
Two years after the end of WWII, a News of the Day team made the 20,000-mile air journey from Guam to Iwo Jima, retracing the Navy’s successful “island hopping” campaign in the Pacific. The islands’ peaceful appearance in 1947 is contrasted with newsreel images of the bloody battles fought on them a few years earlier. 35mm, b/w, 8 min.