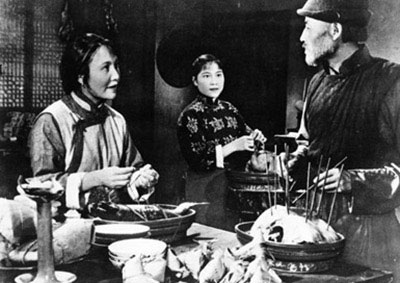 One of more confounding aspects of Chinese cinema of the “Seventeen Years” period is the prevalence of films derived from works associated with the left-leaning, Western-influenced May 4th Movement, which Mao Zedong had implicitly denounced as being insufficiently attentive to the lives of the peasantry and the mechanics of class struggle. However, the literary cachet of these works assured audiences that the film adaptations would be “quality pictures,” while their mildly progressive politics made them reasonably acceptable to the ideological dictates of the new regime. Hugely successful at the time, these films have a fascinating awkwardness about them, the square peg of early modernist literature meeting the round hole of socialist realism. Based on the celebrated short story by literary lion Lu Xun, New Year’s Sacrifice—which chronicles the travails of a poor servant (Bai Yang) in the house of a wealthy noble family who is twice sold into marriage, twice widowed and forced back into lowly servitude—is among the most successful of these adaptations, largely due to a refined screenplay by May 4th acolyte Xia Yan and the carefully detailed direction of Second Generation master Sang Hu.

The gender equity programs put into place on the Mainland after 1949 saw the emergence of some influential female voices in Chinese cinema, the most famous of whom was Zhang Nuanxin. Her masterpiece Sacrificed Youth tells the story of 17-year-old Li Chun, who is transported to the mountainous Dai territory in Yunnan during the Cultural Revolution as a “sent-down girl” to live and work amongst the locals. Boarding in a Dai home with a “Dadie” (Father), “Yiya” (an old Grandmother) and “Dage” (Elder Brother), this daughter of urban intellectuals is shocked by the earthy sensuality of the locals. While she eventually comes to realize that beauty is something deeper and more primal than the Maoist maxim repeated to her by her teachers (“Only true modesty is true feminine beauty”) and begins to share in the joyous, vibrant and uninhibited life of her indigenous hosts, her rejection of Dage’s lustful attentions precipitates her return to the city. Revisiting the area years later, she receives a shocking and heartbreaking surprise. While her use of landscape is as breathtaking as that of her Fifth Generation successors—especially in the staggering final sequence, a series of long shots of barren plains and forbidding mountains that resembles a fractured Qing scroll painting—Zhang forgoes their symbolism in favor of a more ethnographic (and empathetic) style, and combines this with rarely addressed issues of female self-realization and sexual awakening.