New Restorations and Discoveries From Center for Visual Music 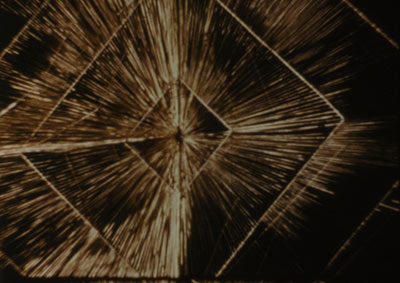 “New Restorations and Discoveries From Center for Visual Music”

From absolute film to psychedelia, this program of revelatory moments from the history of visual music and kinetic art explores lost, legendary and rare treasures found in the archives of Center for Visual Music (CVM). Featuring among others, rare works by Jordan Belson, including the unfinished Quartet (1983) and the U.S. premiere of the restoration of the infamous LSD (1962); Charles Dockum’s Mobilcolor Performance Film (1970), a later color-light projection composition that provides insights into the history of kinetic art; and two newly discovered films by John Cage and Richard Lippold, including the U.S. premiere of The Sun Film (1956), a kinetic art sculpture.

The program, featuring many newly preserved 16mm and 35mm prints, will be introduced by archivist/curator Cindy Keefer of CVM. Richard Brown, Ph.D., will introduce The Sun Film and The Sun, Variations Within a Sphere No. 10 [documentation] (1956) by John Cage and Richard Lippold.

Program notes by CVM, except where noted.

Filmmaker Oskar Fischinger chose a popular foxtrot, “I’ve Never Seen a Smile Like Yours.” Fischinger transforms the dance into a fantastic abstract ballet, in which two levels of “dancers” flow past and through each other: regular and orderly groups of thin-line, hard-edged figures. —William Moritz
35mm, b/w, sound, 3 min.

Filmmaker Jordan Belson stated this was simply an unfinished project representing the zeitgeist of this time, rather than a finished film.
16mm, color, sound, approx. 5 min.)

A kinetic alchemy of the light and electronic works of Nicolas Schöffer, Julio Le Parc, USCO, and Nam June Paik. An exploration of the effect-versus-content thesis of Marshall McLuhan’s, “the medium is the message/massage.” —Jud Yalkut.
16 mm, color, sound, 10 min.

“The Sun, Variations Within a Sphere No 10”  [documentation] (1956)
Directed by John Cage, Richard Lippold

Two films on the construction and display of Lippold’s kinetic art sculpture, edited according to Cage’s graphic score composed via chance. The films were discovered in 2010 by musicologist Richard Brown, Ph.D.
16mm, color, silent, approx. 7 min.

Filmmaker Richard Baily was offered a position at Robert Abel & Associates based on his work in this award-winning early computer animation film, made while a student at CalArts.
Digital Video (16mm transferred to HD), color, 6 min.