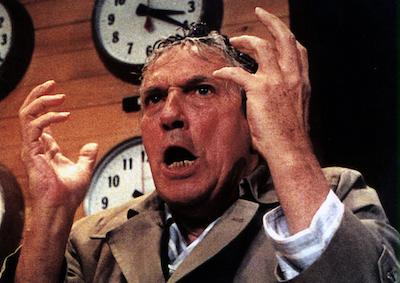 A masterpiece of 1970s cinema featuring one of the most memorable, oft-quoted lines of dialog in film history, Paddy Chayefsky’s original satire stands today as a prophetic indictment of electronic mass media and television news. Chayefsky comes full circle from his start as one of the most respected dramatists of the golden age of television to eviscerate the modern medium via a fictional morally-bankrupt TV network, the Union Broadcasting System (UBS). Flawlessly helmed by live TV alum Sidney Lumet, Network mourns the passing of the Murrow era of journalism while frighteningly predicating today’s rise of infotainment and corporate media conglomerates that place the almighty dollar above the public interest.