My Name is Negahdar Jamali and I Make Westerns (Iran, 2013) 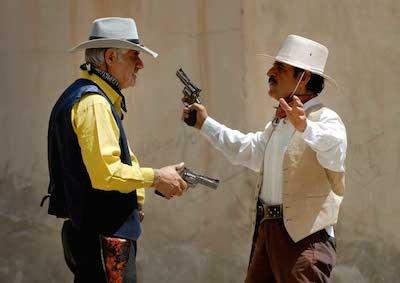 My Name is Negahdar Jamali and I Make Westerns (Iran, 2013)
Directed by Kamran Heidari.

Utterly unexpected and thoroughly charming, director Kamran Heidari’s debut documentary about an amateur filmmaker in southwestern Iran explodes preconceived notions and illuminates the universal power of popular culture. Since he was a teen, Negahdar Jamali has obsessively made low-budget westerns modeled on his idols John Ford and Sergio Leone in the arid plains surrounding his hometown of Shiraz. Ignored by the official film ministry and harangued by his long-suffering wife, Jamali perseveres with a dreamer’s passion.

In Persian with English subtitles, 65 min.