‘Moulin Rouge’ and ‘In This Our Life’ 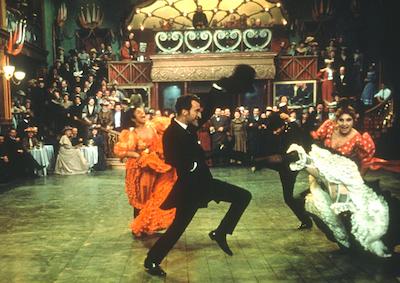 Huston was in the forefront of filmmakers who began exploring the psychological, dramatic and aesthetic possibility of color after WWII. In this romanticized biography of artist Toulouse-Lautrec, Huston and cinematographer Oswald Morris brilliantly used Technicolor to reproduce the look of Lautrec’s sketches, paintings and lithographs of 19th-century Paris, but also to externalize the shifting moods of the painter himself. Paul Sheriff and Marcel Vertès shared a deserved Academy Award for Best Art Direction, with Vertès also winning a second Oscar for Best Costume Design. While Morris’ work wasn’t nominated, he would become a trusted Huston collaborator on nine more features, including Moby Dick (1956), Reflections in a Golden Eye (1967) and The Man Who Would Be King (1975). José Ferrer, working in painful leg braces to recreate Lautrec’s diminutive stature, gives a volatile, brooding performance as an artist whose obsession with the world’s rejection of him as a man drives him to achieve aesthetic greatness. Huston delights in contrasting Lautrec’s internal gloom with the vibrant cafe world he captured, kicking the film off, literally, with an opening can-can number, one of the most exhilarating dance sequence in film history.

In This Our Life (1942)
Directed by John Huston

The phenomenal success of The Maltese Falcon (1941) prompted Warner Bros. to give their hot new director a chance at In This Our Life, the studio’s prestige production for the year, based on a Pulitzer Prize-winning novel by Ellen Glasgow and to feature its biggest stars, including Bette Davis and Olivia de Havilland. The property was intended to match RKO’s recent hit with William Wyler’s The Little Foxes, and John Huston seemed on the surface to be a natural, having contributed to the scripts for Wyler’s Jezebel (1938), Wuthering Heights (1939) and A House Divided(1931). Huston’s portrayal of a patrician Southern family torn apart by the self-obsessed, destructive behavior of its eldest daughter, Stanley (Bette Davis), finds him trying on for size the trappings of a big studio production with the influence of Wyler and Gregg Toland felt in every scene. Huston lets the melodrama run quite a bit hotter, however, having found in Davis, he said, “something elemental… a demon within her which threatens to break out and eat everybody… I let the demon go.”