Moses and Aaron; and From Today Until Tomorrow 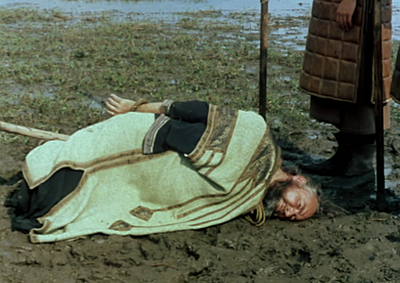 Straub-Huillet filmed Schoenberg’s unfinished opera in the Roman amphitheater of Alba Fucense. Taking nearly 15 years to finance, Moses and Aaron was based on their rigorous consideration and questioning of Biblical and archeological history, particularly with respect to the collective memory — passed down and transcribed over hundreds of years, however inaccurately — of the Egyptian enslavement of the Hebrews and the Exodus. Straub-Huillet’s concern is with the myth of human progress, and the transition from polytheism to monotheism. Lost in the process, they suggest, was a kind of tenderness and rootedness in nature, a traumatic absence into which a new kind of violence was born.

Schoenberg’s rarely performed one-act opera, a withering portrait of a suffocating bourgeois marriage, gets the Weimar treatment in Straub-Huillet’s staged film. As the husband retreats into impotent sexual fantasy and his wife into aching loneliness — shades of Erich von Stroheim and Jacques Rivet — they are plunged into a mise en abyme of jagged atonal music and slashing crepuscular light.

In 1923, sensing the gathering storm of “fear, danger and catastrophe” in Germany, the composer Arnold Schoenberg wrote a devastatingly prescient and heartbreaking letter to his former friend, the painter Wassily Kandinsky. Schoenberg aligned his fate with that of all Jews, knowing they were soon to face exile or violent death. Straub-Huillet’s film, a recitation both of Schoenberg’s letter and Bertolt Brecht’s 1935 speech to the International Congress in Defense of Culture, is a fierce condemnation of anti-Semitism, German crimes against humanity and the barbaric war machine of capitalism.