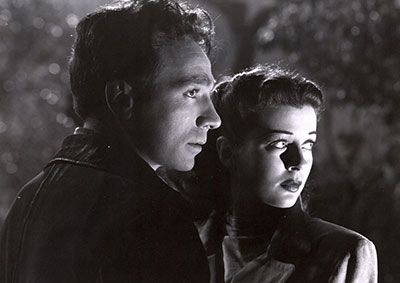 The early life of director Frank Borzage (1893-1962) offered few clues that he would develop into one of the screen’s great romanticists. Born in Salt Lake City, he went to work in a silver mine at 13 but soon left to join a traveling stage company. He landed in Hollywood in 1912, where he found steady work playing bit parts and then leads in Westerns for Thomas Ince. By 1916 he was directing two-reelers and melodramas for Universal, including a series of Westerns starring Texas Guinan that seem startlingly adult today. His breakthrough film was Humoresque (1920), a sentimental but effective adaptation of Fannie Hurst’s story about a poor Jewish boy’s struggle to become a concert violinist. It ran for 12 weeks at New York’s Criterion Theatre, breaking the theater’s prior attendance records. It also set Borzage on the path to his reputation as a distinctive visual stylist and specialist in stories about young lovers who find beauty and romance amid dire poverty. Hollywood recognized his artistry by voting him the first Academy Award for directing for Seventh Heaven in 1927, and again for Bad Girl in 1931.

Working at many studios before settling at MGM, he remained a leading director throughout the ‘30s, scoring critical and commercial success with such films as A Farewell to Arms (1932), History is Made at Night (1937), Three Comraders (1938), and The Mortal Storm (1940). He resumed freelancing in 1943, but his unabashed romanticism no longer suited the mood of wartime America, and he was unwilling or unable to adapt his style to the brutal realism of film noir. In 1945 he signed a five-picture deal with Republic, a minor league studio that was trying to establish itself was an A-player in the competitive postwar market. But I’ve Always Loved You (1946) and That’s My Man (1947) were expensive, poorly reviewed flops, and Borzage ended his tenure at Republic with Moonrise, a more modest production that still lost money. He did not direct a theatrical feature again for 10 years, when he briefly returned with his final two films. Today, most admirers of Borzage’s work rank Moonrise near the top of his sound films, but contemporary reviewers expressed disappointment. Variety called it, “well made, but too drab,” while The New York Times characterized it as, “a clouded tale filled largely with pallid people.” More recent critics such as John Belton have praised the “psychological intensity of Borzage’s images, seen in his constant use of foreground-background interaction, rack focus, tight close-ups . . . shadows and off-axis, angled shooting.” For Belton, these visual flourishes express the psychological dilemma of the leading character, a man haunted since childhood by his father’s execution for murder and his belief that he must follow the same path. Another critic, Frederick Lamster, echoes Belton by calling the film a, “summing up . . . or testament,” of a man, “all of whose films express a belief in transcendence and regeneration.” –Charles Hopkins

Preceded by:
“Rhapsody in Wood”
Directed by George Pal

“News of the Day, Vol. 19, No. 257”
Addressing a joint session of Congress, President Truman demands legislation to halt the spread of Soviet power in Europe. In Paris, the foreign ministers of 16 war-ravaged nations agree to accept US aid distributed under the Marshall Plan. 35mm, b/w, 9 min.