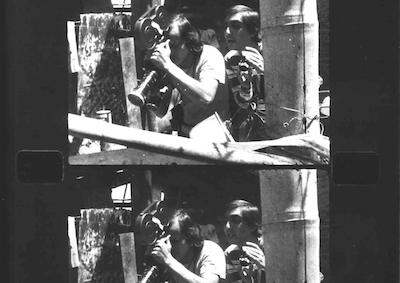 In a reflexive mode, the filmmakers in this program contemplate their chosen medium, its history, defining characteristics and iconic movements. If there exists any Latin American specificity of meta-cinema, The Vampires of Poverty (Agarrando pueblo, 1977), by Luis Ospina and Carlos Mayolo, is one of the starting points of that tradition. It reflects on the representation of poverty in Latin America, produced by privileged local filmmakers and financed by European funders in search of the elusive “real” in Third World cinema. Ospina and Mayolo accompanied the 1978 Parisian premiere of The Vampires of Poverty with a manifesto entitled “What is Poverty Porn?” — which represents a new level of self-awareness and critique surrounding the foreign perception of Latin American film. Ximena Cuevas’ Cinepolis, la capital del cine (Cinepolis, the Film Capital, 2003) presents an insider’s unsettling perspective on the everyday world of image-making and image consumption. The cinematic apparatus is foregrounded in the Cuban critique of flawed and careless production in Enrique Colina Barnet’s Chapucerias (1987), while the Brazilian conceptual short Duelo (Duel, 1973), by Daniel Santiago, is a conceptual game that represents the tensions between Super 8 and 16mm filmmakers.