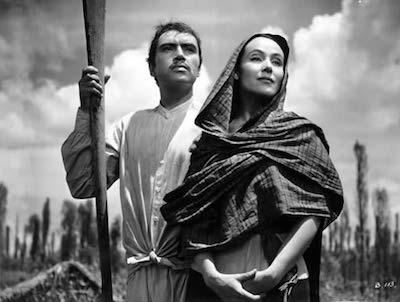 The collaboration of director Emilio Fernández and cinematographer Gabriel Figueroa received international attention for the first time with this film, which received the Grand Prix (now the Palme d’Or) at Cannes. The idyllic provincial settings and a veneration of indigenous Mexican peoples which became the signature of their work together are epitomized in María Candelaria. A painter comes to the village and, believing the beauty and purity of the Mexican race to be embodied in María Candelaria, asks her to be his model. The painting, representative of the intrusion of civilization, ultimately causes chaos. María Candelaria’s face is superimposed onto a nude portrait for which another Indian woman posed. The story is told in flashback to a journalist by the painter who mournfully acknowledges that his intrusion in the community provoked this tragedy.

Two middle-aged brothers (Floren Delbene and Orestes Caviglia) fall in love with a tango singer (Libertad Lamarque) they have met in a gambling hall, after she is stranded in their border mining town, causing them to turn against each other. The Italian-born Mario Soffici had made a name for himself depicting authentic rural melodramas that focused on class inequalities in Argentina, thereby appealing to nationalist-oriented critics and audiences who rejected the Hollywood-style glamour of many Argentine films. Here he directs the popular singer and radio star Libertad Lamarque, known as “La novia de América,” in a psychological drama of jealousy and desire that moved her away from the stereotyped tango-singing roles that had earned her the mantle of the late Carlos Gardel. Lamarque’s professional work was interrupted in 1947 when Eva Perón became extremely jealous of the actress, forcing her to flee to Mexico where her career continued for decades.