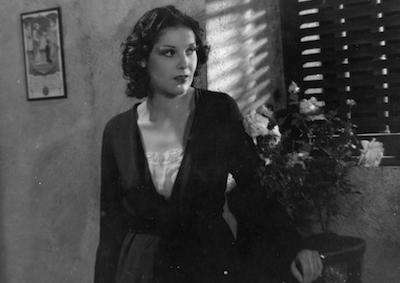 Los tallos amargos is based on a novel by journalist Adolfo Jasca, winner of the Emecé Literary Prize, Argentina’s highest literary honor. It tells the story of Alfredo Gaspar, a Buenos Aires journalist who is down on his luck. He meets a Hungarian immigrant and together they create a fake journalism correspondence school as a get-rich-quick scheme. After a brief period of initial success, Alfredo becomes more and more paranoid, and eventually commits a murder, which he then attempts to cover up. But he can’t run away from his conscience.

While the first half of the film is told in a flashback, the second visualizes Alfredo’s fate after the murder, when he meets and falls in love with a young woman. Considered one of the most beautifully photographed films in film history—the film was shot by Ricardo Younis who was a student of Gregg Toland—Los tallos amargos switches between objective and subjective points of view with abandon, interpolating dream sequences and Alfredo’s reveries, as desperation, guilt, and paranoia get the better of him. Ayala, one of the most prolific and courageous directors working in Argentina, was unafraid of going to the darkest corners of the human psyche, as he does here. Also worth mentioning is the music by Astor Piazzola, one of the greatest Argentine composers of the 20th century, who revolutionized traditional tango music by adding jazz and classical elements. In 1957, the film won the Silver Condor Award (Premio Cóndor de Plata), the Argentine equivalent of the Oscars. The film had been completely forgotten, until resurrected by the Film Noir Foundation after film collector/historian Fernando Peña found the original camera negative rotting in the basement of the family of the film’s producer.

Released in the U.S. by Columbia as an exploitation picture, this Mexican production reveals artistic pretensions in telling the story of a betrayed fisherman who discovers a mysterious island inhabhited only by women.