Liza With a Z and Cabaret 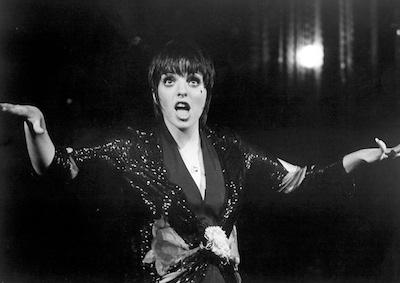 Liza With a Z: A Concert for Television (1972)
Directed by Bob Fosse

Shot with eight 16mm film cameras for NBC, this four-time Emmy-winning special features a fresh-from-Cabaret Liza Minnelli in a wildly dynamic, sequin-studded song-and-dance spectacular, blown up to 35mm. The Archive is proud to screen Minnelli’s personal print of this thrilling televisual trip, featuring the “sensational with an S” numbers “Son of a Preacher Man,” “God Bless The Child,” “Bye Bye Blackbird,” and “Say Liza.”

Bob Fosse won an Oscar for Best Director for his masterful handling of sociosexual and political themes in the form of a musical, a genre previously reserved for lighter subject matter. Liza Minnelli stars as Sally Bowles, an émigré aspiring to stardom in a decadent Weimar Germany nightclub full of crossdressers, gay men, lesbians and members of Berlin’s middle classes enjoying unprecedented sexual freedom. Just as the world affects the body (as Fosse’s choreography tells us), implanting gestures and movements, so show business is not immune from changes in the political order, even if — or especially if — it seems to be completely separate from the outside world. Minnelli and Joel Grey as the devilish master of ceremonies, also earned Academy Awards, as did Geoffrey Unsworth for cinematography.