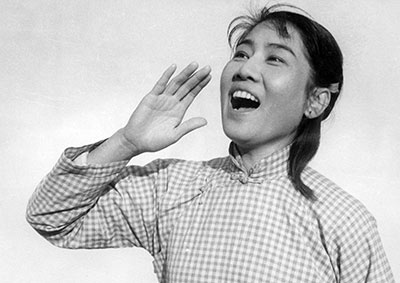 A brief relaxation of strict socialist realism guidelines in the 1960s saw the emergence of several wonderful and now rarely seen comedies, the most popular of which was the deft and enormously charming Li Shuangshuang. The title character (Seventeen Years superstar Zhang Ruifang) is a model member of a village commune who cheerily denounces the laziness and minor corruption of the village men, especially her kind but not overly bright husband. As she spurs on the other village women to do the same, she and her husband become estranged and unhappy. All ends well, of course, as the couple triumphantly reunite in the name of Party and Nation, but beneath the breeziness one can feel greater metaphors at work, and harbingers of things to come: is Li Shuangshuang perhaps a stand-in for an overly demanding Party, and her husband the exhausted people of China? (For Kevin B. Lee, “Li Shuangshuang’s uncompromising stance toward her community foretold the kind of behavior that would explode full-scale during the sweeping, destructive purification campaigns of the Cultural Revolution just a few years later.”)

Seventeen Years director Lu Ban was a master of comedies that gently tweaked the Party bureaucracy; his most famous film, When the New Director Arrives, poked good-natured fun at the feudal impulses and reactionary mindset of some lower Party officials. But Unfinished Comedy, easily the most surprising discovery of this series, is something else entirely. Never screened upon release and rarely seen since, its formal audacity and radical critique of Party censors landed it in hot water just as the Hundred Flowers Campaign, the brief period of significant artistic freedom in the late 1950s, was coming to a close; Lu himself was heavily persecuted, and never made another film. More or less playing themselves, two famous comedians from pre-Revolution days perform a series of sketches in a theater for a group of Party cadres (purported to be “authorities in literary criticism”). The stage performances blend over into absurdist, self-contained fantasy episodes where the two comics allegorically parody Party propaganda and ideological orthodoxy. The cadres, as one might imagine, are far from amused, and their reactions parallel the film’s real-life treatment at the hands of the government. “Perhaps the most accomplished film made in the seventeen years between 1949 and the Cultural Revolution” (Paul Clark, “Chinese Cinema: Culture and Politics Since 1949).”