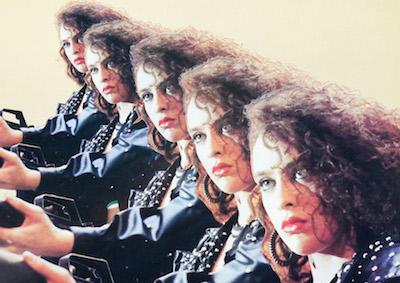 Indonesia is a beautiful place. Because only Indonesia is capable of transforming a combination of anti-logic, haste and ambition into the miracle beyond miracles known as Lady Terminator. When a man steals a ghost snake from a sex-witch, she promises revenge on his great-great-granddaughter. 100 years later, a lady anthropologist is attacked by the same ghost snake and becomes a cyber-robotic master of death. Her purpose? SEX! MUTILATION! LAZER EYEZ! All in the interest of making life unbearable for a pop star who also happens to be a certain great-great granddaughter. Excessively perverted and mind-blowingly fun, Lady Terminator is a neon-soaked, fifty-uzi salute to plagiarism, explosions and crotch violence against men. This movie also features the first and only role from Adam Stardust, a half-man, half-mullet who will reinvigorate your attitude towards life. — Joseph A. Ziemba

After the massive success of The Street Fighter, Japanese studio Toei built a new karate series around a female lead, casting a young actress who had appeared in a cameo alongside her mentor Sonny Chiba in the origin film. Still a teenager at the time, Etsuko Shihomi exploded on screen and created a new character type: a tough fighter who was fierce, fearless, good-hearted and decidedly non-sexualized — a departure from Toei’s typical formula. Shihomi is the half-Chinese, half-Japanese Li Koryu, who travels to Yokohama to investigate the disappearance of her undercover cop brother. Li discovers a smuggling ring run by a drug lord with his own personal army of deadly fighters, and must penetrate his evil lair with the help of a fellow karate master (Sonny Chiba). Genre entertainment of the highest order, the Sister Street Fighter films are a wild ride through some of the best exploitation cinema Japan produced in the 1970s. Funky and over-the-top, filled with wall-to-wall action, and featuring some of the craziest villains ever depicted on screen, the series embodies female power in a male-dominated genre and is a magnificent showcase for the physical presence and martial arts skills of its lead star. — Arrow Video