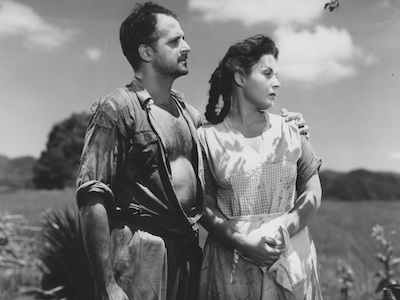 Yeyo, a young peasant is in love with Trina, the daughter of a local landowner, but her father, Don Pedro del Valle, objects to her marrying below her class. He has found a more suitable husband, but Trina loves Yeyo. Seemingly, only the “Virgin of Charity” can intervene. This Cuban silent film was highly praised and extremely popular at the time of its release, because of its socially critical view of the plight of peasants, and its religious themes. Its sophisticated style in composition and montage is evident, especially the horse racing sequence. A veteran of Hollywood, director Ramón Peón shot numerous features in Havana in the 1920s, before going to Mexico to assist Antonio Moreno on Santa (1932), and then enjoying a long career in Mexico. Calling Peón the Cuban Griffith, world-renowned cinematographer Néstor Almendros said of the director, “he was a visual artist and narrator of exceptional talent.”

A young peasant girl, played by Xonia Benguría, who also worked on the script, has a baby by the master of the plantation, which is taken away from her. She marries and has another son, but the loss of the child has scarred her for life. Shot mostly on location in Pinar del Rio, Cuba, this film visualizes the harsh life of peasants and workers in a sugar economy, where only a privileged few at the top benefit, while the workers are enslaved as tenant farmers. Somewhat episodic as it follows the life of a simple woman, Casta de roble benefits from Manuel Alonso’s keen sense of style, its social realist narrative enlivened with many compositions quoting Sergei Eisenstein and Alexander Dovzhenko. After the revolution, Benguría, Alonso, Rosell and eventually Espasande went into exile in the U.S., where they contributed to the production of Spanish-language theater and stage entertainment in Miami and New York.