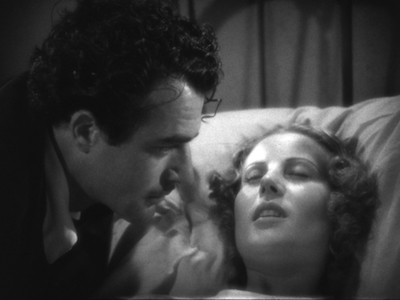 Produced independently by Jaime del Amo, the wealthy scion of a Spanish California family, the film was shot in a Los Angeles rental studio. Based on Scènes de la vie de bohème by Henri Murger, and the Giacomo Puccini opera, the latter without credit, the film sticks close to its sources: the young, tubercular seamstress, Mimi, falls in love with the impoverished playwright, Rodolfo, but poverty takes its toll on their relationship. When Mimi meets a wealthy suitor, Viscount Paul, to ask him for financial help, Rodolfo dumps her. Although shot on a very low budget, Frank Paul Sylos’ art direction, John Alton’s atmospheric lighting, and Josef Berne’s steady direction make this film look much more expensive. Alton, known for his many Argentine and American film noirs, considered it his favorite film. Unfortunately, the film’s literary pedigree made it less acceptable to working-class Mexican-American audiences.

Cantabria’s second independent production was very successful in the cinemas of L.A.’s Mexican neighborhoods, although the narrative actually takes place in Spanish Harlem in New York City. On the eve of Columbus Day celebrations, the boxer Mateo returns home from a stint in prison and realizes that his wife is pregnant, and he can’t be the father. His wife Blanca has, in fact, been having a secret affair with her sister Lola’s fiancé, Claudio. Mateo confronts his wife, but she refuses to name the father, leading to tragic results. Produced at the Grand National Studios, the film stars Fernando Soler, the Mexican actor playing against type, which earned him kudos from the Spanish-language press. Other actors come from Spain, Puerto Rico, Cuba and the Philippines, making Verbena trágica an ode to New York’s multi-ethnic Latin community.