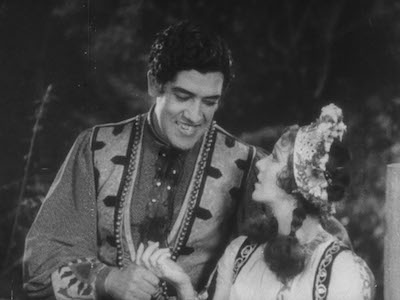 A Franciscan monk in old California rescues his best friend’s fiancé from bandits, but then must battle with a reawakened sexual desire. Curiously, the religious themes of the film had connections to the career trajectory of its leads: Anita Campillo reportedly left a convent school to become an actress, while Mojica would eventually retire from both singing and acting to enter a monastery. Departing from Spanish-language films set in nondescript or “neutral” locales, La cruz y la espada highlighted California history under Spanish colonialism. By casting the Mexican tenor and radio star José Mojica in a series of films, Fox also found a formula that would later spell success for Mexican cinema, capitalizing on the synergy between cinema, radio and transnational star power. La cruz y la espada is a key example of several shifts in Hollywood’s production of Spanish-language films. Rather than translating English-language films, Fox opted to produce original screenplays.

The “King of the Gypsies” rises too far above his station when he courts an aristocratic lady whose fiancé is extremely jealous. Mojica’s gypsy king is of course pure Hollywood camp in a fairy-tale opera setting. Capitalizing on the popularity of opera and radio star Mojica, Fox hoped to compete with the emerging Mexican film industry, which could not at that time have produced the film’s elaborate Hungarian-inspired musical number. The film also featured Los Angeles-based actor Romualdo Tirado, who became a staple of the city’s theatrical scene in the 1920s, writing, directing and acting in works of multiple genres with several theater troupes. He would also produce a number of independent films, while regularly appearing in supporting roles in Hollywood Spanish-language films. When the film premiered at the Teatro Hidalgo in May 1933, Mojica appeared live in person and Tirado, accompanied by other mainstays of the Spanish-language theater community, performed a musical prologue.