Kiss Me Kate and My Sister Eileen 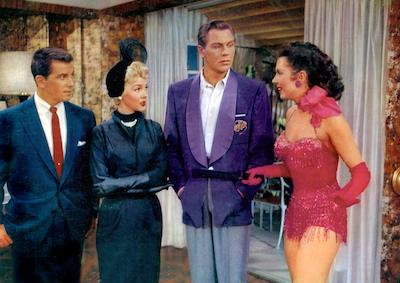 “From this Moment On” was not only a Cole Porter musical number in George Sidney’s 3D, musical version of Shakespeare’s “The Taming of the Shrew,” it was literally from this moment on that Bob Fosse’s career flourished (though not in the way he had originally envisioned — that he become the next Fred Astaire). Playing Hortensio, a role so small that the name does not even receive a mention, Fosse convinced Hermes Pan to choreograph his jazzy dance scene with Carol Haney, and the result — which is under a minute long — is so memorable that it attracted not only the audience’s attention, it led to Fosse’s choreographing the dances in The Pajama Game. The Archive will screen the 2D version of Kiss Me Kate, where feuding divorcees reunite as co-stars, everyone quarrels offstage, and gangsters help you “Brush Up Your Shakespeare.”

Arguably Richard Quine’s most delightful film, My Sister Eileen is a musical scored by Jule Styne and Leo Robin and based on the same source material as Comden and Green’s irresistible Broadway show Wonderful Town. The film follows two sisters from Ohio who are newly transplanted to Greenwich Village and struggling to find work and love in the big city. The first film for which Bob Fosse received screen credit as a choreographer, My Sister Eileen is also perhaps the film in which Fosse appears onscreen for the greatest amount of time. A welcome alternative to the somewhat more formal MGM musicals of the period, the film possesses a charm and intimacy of scale that remains as appealing today as it was at its first release.