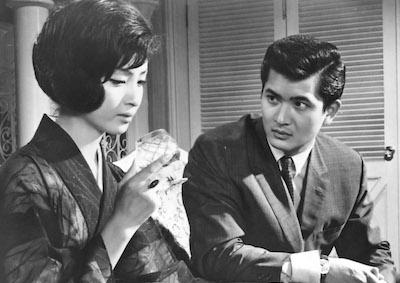 Based on a book by Taiko Hirabayashi, one of Japan’s most famous female novelists, Kanto Wanderer (1963) puts a Suzukian spin on the classic yakuza movie conflict between giri (duty) and ninjo (humanity). Nikkatsu superstar Akira Kobayashi plays Katsuta, a fearsome yakuza bodyguard torn between defending his boss against a rival gang leader and his obsession with Tatsuko, a femme fatale who reappears from his past. Director Seijun Suzuki uses this traditional story to experiment with color and to indulge his interest in Kabuki theater techniques and effects, most notably in the stunning final battle, in which the scenery falls away to reveal a field of pure blood red. “As an example of Suzuki’s mid-period output at Nikkatsu, Kanto Wanderer offers us an inspiring sample of experimentation on assignment.” —Margaret Barton-Fumo, Senses of Cinema.

Though director Seijun Suzuki created it in the midst of his stylistic breakthrough, The Call of Blood (1964) has never received the same amount of attention as other films he made around the same time. Nikkatsu icons Hideki Takahashi and Akira Kobayashi star as brothers—one a gangster, the other an ad man—who unite to avenge their yakuza father’s death 18 years before. The film features a bold use of color; an absurdist concluding gunfight; and, in one memorable scene, an impressively illogical use of rear projection, as the brothers argue in a car while ocean waves rage around them.