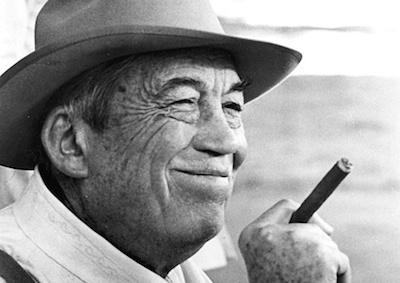 Huston received orders to report for duty to the U.S. Army Signal Corps in March 1942, but applied for a three-month deferment to finish shooting Across the Pacific (1942). With Huston a few days shy of the task, the Army came calling again and Vincent Sherman took the reins on Pacific. The next four years Huston spent at war would have, as with so many others, a profound impact. “It gave a sense of the reality of human behavior,” he said, an awareness that can be felt in the increasingly biting realism of many of his postwar master works. Huston’s job for the Army making documentaries about the experiences of the common soldier produced three masterpieces in their own right. Report from the Aleutians (1943), San Pietro (1945) and Let There Be Light (1946) form what Huston biographer Lawrence Grobel describes as a “compelling trilogy” that “precisely captured the preparations for war, the actual gritty fighting and the lingering aftereffects.” Of the three, two were released during the war: Report, about the construction and defense of an airstrip on Adak island in the Aleutian chain, and San Pietro, about one of the most important and brutal battles in the Italian campaign. Report, which had a theatrical run, even earned an Academy Award nomination. Let There Be Light, however, Huston’s sensitive and groundbreaking look at the psychological and emotional wounds of war and their treatment, was immediately banned and not seen until 1980, when then Vice President Walter Mondale authorized a screening at the Los Angeles County Museum of Art. Soon after that showing, producer-director Jim Washburn at KCET in Los Angeles approached Huston about presenting all three films, in their entirety, as part of a larger special that would include Huston discussing their production and reception in conversation with veteran war correspondent Clete Roberts. This screening is a presentation of that episode, which represented the first time most people had a chance to see all three of Huston’s war films as a complete trilogy.