House of Bamboo and Anatahan 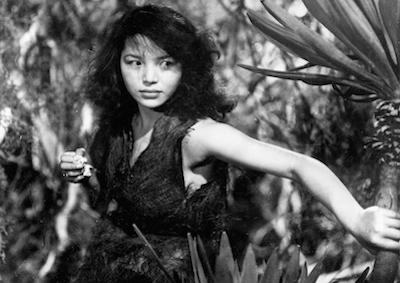 In the postwar era, Hollywood shot a couple dozen films in Japan, where filmmakers explored the country’s vivid natural and urban spaces and the U.S. occupation — with all its colonialist reverberations. Samuel Fuller took CinemaScope cameras to Tokyo for this crime saga about a U.S. military detective who infiltrates an American crime syndicate and gets involved with the Japanese widow of a thief. The movie climaxes with a bravura set-piece in an amusement park perched atop a Tokyo department store. It’s the height of postwar movie action and Scope cinematography.

Some Hollywood filmmakers found more freedom overseas. This was true for Josef von Sternberg, who became fascinated by the true story of a group of Japanese sailors who were stranded on an isolated island, unaware of the war’s end. For his last film, the director opted not to set this tale in a real Japanese locale but to recreate an island jungle on a Kyoto soundstage, where he applied his distinctly Hollywood studio approach to visual design. A saga of human instinct and subjugation, it plays like a fever dream with un-subtitled Japanese dialogue and Sternberg’s own benshi-like narration.