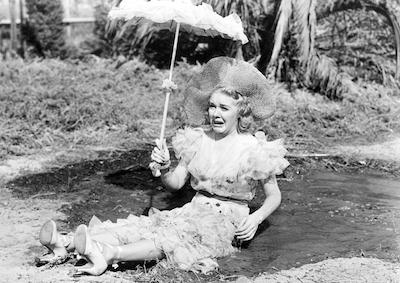 “Hollywood Cavalcade is destined to arouse in the hearts and minds of millions of theatre-goers all the glamour and romance of the bygone era of motion pictures…From the days of Keystone Cops…bathing beauties…slapstick comedies…to mighty modern motion picture masterpieces…here is a production which runs the gamut of Hollywood history!” declared the Twentieth-Century Fox program at the film’s premiere in October 1939. Our travelling companions through this whirlwind Technicolor history are Don Ameche and Alice Faye, who rise together from prop boy and understudy, respectively, to studio magnate and famous star, before his personal demons drive them both apart. The film’s early scenes during the silent era when movie making “used to be a kind of game” are populated with the slapstick stars of the day—Ben Turpin, Chester Conklin and Buster Keaton—whose unique brand of comedy are cast in a nostalgic glow, as King writes, an “emblem of American cinema’s youth, a cherished object of reminiscence abstracted from its own past.”