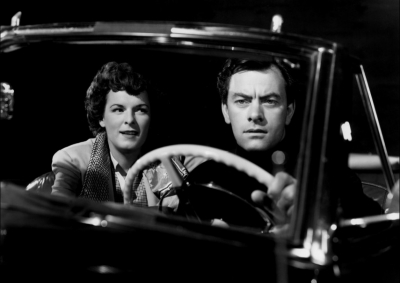 Steven Kenet (Robert Taylor) is a war veteran with a brain injury who is committed to an insane asylum after he has apparently murdered his wife. However, the psychiatrist treating him begins to doubt his guilt (Audrey Totter). Loss of identity or memory is a common trope in film noir, associated with veterans who seek to repress the trauma of war, as it was in German Expressionist cinema.

A man (John Ireland) escapes from an asylum for the criminally insane, hoping to find out whether he was guilty of strangling his girlfriend with a scarf or not. Unfortunately, a lot of the people in this town on the edge of the desert can’t help him. Franz Planer’s moody cinematography keeps the atmosphere nightmarish and noir, with Ireland giving a surprisingly good performance at the center.